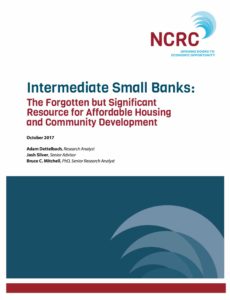 The intermediate small bank (ISB bank) category is often overlooked as a source of community development loans and investments for affordable housing or economic development. However, NCRC’s analysis found that ISB banks (assets ranging from $307 million to $1.226 billion) with Community Reinvestment Act (CRA) exams conducted in 2016 produced over $9.3 billion of community development (CD) loans, investments (excluding those carried over from previous exam periods), and grants (combined hereafter referred to as CD nance). NCRC examined the varying levels of CD finance by banks with different CD test ratings, concluding that there is a significantly larger level of CD finance by banks with “Outstanding” ratings than banks with ratings of “Satisfactory” and “Needs to Improve.”

NCRC analyzed what percentage of CD financing was attributable to CRA regulations. Three scenarios of weakened CRA regulation were developed. Under these scenarios there was an estimated 19%, 60%, and 73% loss in total CD financed activity. In other words if CRA was weakened, a loss of 50 percent of CD nance, which is conservatively less than the middle estimate, is likely. This would mean that instead of $9.3 billion in financing, the amount could be reduced to $4.6 billion over a time period of approximately three years. Before significant changes are contemplated to ISB bank exams, stakeholders need to weigh carefully the billions of dollars that could be at stake for community building and revitalization activities. ISB banks by themselves nance community building to a similar or a greater extent than major Department of Housing and Urban Development programs such as the Community Development Block Grant (CDBG) program.

ISB banks have an interest in retaining the CD test since our research nds that they earn higher ratings on the CD test than the lending test, the second part of their CRA exam. In other words, the CD test boosts ISB overall CRA ratings.

To evaluate the effectiveness of current CRA examination procedures and rigor, a series of statistical tests were completed. A logistic regression analysis showed significant differences between institutions scoring “Satisfactory” and “Outstanding” ratings in CRA exams. A portion of this difference is attributable to CD finance activities, however much of the differences in ratings were attributable to unidentified factors not included in our model. As discussed below, important qualitative factors driving ratings are unable to be modeled at this point. Our recommendations include suggestions to the regulatory agencies for improving upon the reporting of qualitative factors so these can be better assessed for their consistency and reasonableness. In other words, ratings reflected differences in the levels of CD nance but ratings could more accurately reflected differences in CD nance if the ratings methodology was improved.

Another analysis, an ordinary least squares regression analysis of the factors driving CD nance demonstrates that institution asset size and geographic coverage are associated with greater amounts of CD nance. Nevertheless, ISB banks across the range of ISB asset size had sizable CD loan and investment amounts that examiners judged to be innovative and responsive to needs.